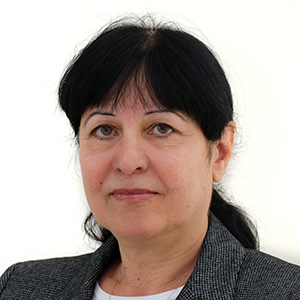 Kina Chuturkova has been a partner since 2002 and heads the Dispute Resolution Practice Group at BOYANOV & Co. She has been working mainly in the field of commercial and civil litigation, enforcement of IP rights, including through litigation, judicial review of administrative acts, domestic and international arbitration. Kina is an arbitrator included in the List of the Arbitration Court at the Bulgarian Industrial Association and is often appointed to act as such.

Kina Chuturkova remains a towering figure in the Bulgarian market, advising an impressive roster of clients featuring banks, construction companies, companies from the pharma sector, distributors and manufacturers. She is well versed in international disputes as well as cases before local courts. Market observers recognise her for her attentiveness, with one describing her as a “great lawyer, very diligent.” (Chambers Europe, Chambers Global)

Considered “one of the best Bulgarian litigators,” Kina Chuturkova is well versed in civil and commercial litigation as well as domestic and international arbitration, utilising her long-standing experience as a former judge. Clients appreciate her co-operativeness and say: “It is very comfortable to work with her.” (Chambers Global)

Often representing clients in front of the courts, Kina Chuturkova is described by peers as an “excellent litigator.” She has additional expertise in trade mark oppositions and in anti-counterfeiting topics, including customs seizures and related criminal proceedings. (Chambers Europe)

CNIL Refuses To Let Monsanto Off The Hook

CNIL Refuses To Let Monsanto Off The Hook   On 26 July 2021, the French Data Protection Authority (“CNIL“) issued a fine of EUR 400,000 against Monsanto, a leading company in the field of agricultural biotechnologies. The decision elucidates the criteria for differentiating between a data controller and a data processor and validates a strict approach […]

DTB Assisted Villa Dubrovnik in the acquisition of D-Resort Sibenik

DTB Assisted Villa Dubrovnik in the acquisition of D-Resort Sibenik   Dogus Croatia (Croatian subsidiary of one of the largest private-sector conglomerates in Turkey) and Martimus B.V. completed the sale of a majority stake in Villa Dubrovnik to Erste Pension Fund. Villa Dubrovnik (a company listed on Zagreb Stock Exchange) operates a five-star hotel in […]
Nickolay Nickolov

We use Performance Cookies that analyse your use of our Website and help us to provide you with a better user experience.

We share information about your use of our Website with our analytic partner who may combine it with other information that you have provided to them or that they have collected from your use of other services. Google’s privacy policy >